Should Cryptocurrency be Shariah Screened? 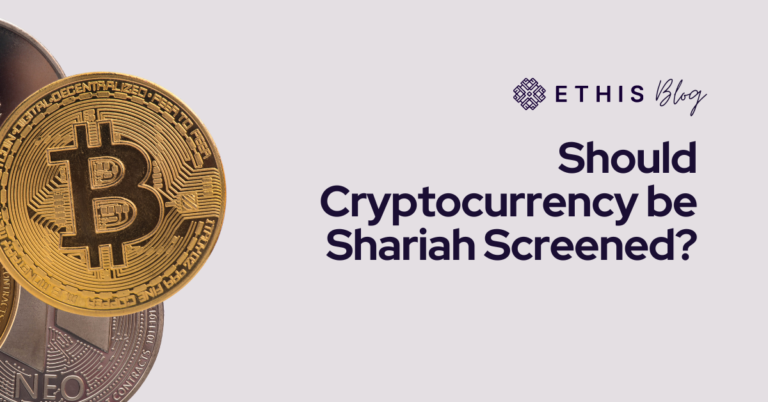 Bitcoin emerged as a new digital currency, known as cryptocurrency and suddenly we can’t stop hearing about it. Everyone rushed into buying it and investing in it, and it was deemed the currency of the future. So what exactly is bitcoin? Where does it stand in the current economy? And what are the options for Muslim investors?

What exactly is cryptocurrency?

Cryptocurrency first came into existence with the creation of Bitcoin, which was first mined by Satoshi Nakamoto in January 2009. Nakamoto’s identity remains a mystery and there is speculation surrounding him being a single individual or a group of people.

What is Bitcoin in essence? A cryptocurrency is a decentralised medium of exchange and transaction. Although it typically possesses little intrinsic value and is not ascribed a value by any government—which means that you can’t redeem it for another commodity.

There are cryptos today that are pegged to underlying assets such as gold. You know how when you take your money out of the bank it becomes actual cash, well, you can’t do that with Bitcoin as it lacks any physical form and with that, it is a shapeless entity that only exists within the network.

Although most sketches and designed pictures of it often feature a gold coin with a letter ‘B’ with two parallel lines crossing it (much like the dollar sign but replacing the S with a B), an actual representation of bitcoin would probably resemble the numbers in the movie matrix, those green numbers floating in vertical motion in pitch-black cyberspace.

The final thing that makes Bitcoin a distinct currency is that it isn’t stored anywhere in particular. It stands decentralised so yeah no banks no storage, it’s in cyberspace!

How does it work and how do I get involved?

How does cryptocurrency exist or move around or change ownership? Let’s take Bitcoin as an example. Basically, Bitcoin is bought through digital transactions. When someone is interested in Bitcoin, the transaction request is broadcasted to a network of computers known as nodes belonging to a Peer-to-Peer network. Imagine these nodes as a network resembling neuron connections in the brain; once a transaction is approved, it links to other transactions to create a block of data. Think of this block as a compacted cube of nodes, and this cube will join with other cubes on what is called a distributed ledger.

A currently existing ledger is what we know as a blockchain. Once data is added to the blockchain, it is permanent and unchangeable. So when you are purchasing Bitcoin, you are actively joining a hypothetical society in the form of data and your purchases are typically bound by records or contracts or the like of it and Bitcoin miners are the only ones to confirm transactions. These miners need to fill specific criteria, otherwise known as proof of work, to be able to be in the position and once the criteria are met anyone can be a miner.

How can Bitcoin benefit me as an investment?

Now here is the fun part. The nature of cryptocurrency is completely conceptual, creating confusion about what you can do with it exactly.

First of all, it is a fast, untraceable, anonymous form of data transfer and recording—potentially ideal for remittances and payments. Secondly, Bitcoin creates a new market for speculators and investors and a whole lot of trading.

Now cryptocurrency, much like stocks, is a very global and vast module in finance, this really depends on many factors. For such modules to be befitted for Islamically inclined contributors, a screening process needs to be adapted.

Today, in the stock trade, there exists Shariah screening platforms aimed at identifying the shariah compliance and permissibility of listed companies. These screenings are done through inspection of many aspects within the dealings of the company including, the presence of interest-based transactions, cash and leverage compliance, purification of dividends, screening of financial ratio, as well as overall questionable activities and ventures screening for the presence of alcohol, gambling, etc.

Now to bring this kind of screening to cryptocurrency, answers must be provided to the questionable areas preventing permissibility like the absence of regulatory standards in fund movement, risk management, and investor security as well as the possibility of monopolies taking over.

For all this, screening criteria need to be created by two parties, one would be shariah advisors to look at all angles necessary for compliance and the other is cryptocurrency experts that ensure that all details about the functions and potential of the currency are explained to the advisors for them to have a comprehensive understanding before issuing their opinion. This process will assist in providing a clear image of compliance criteria as well as ensure that there is no vague aspect to cryptocurrency or stone unturned.

Can cryptocurrency be shariah screened?

Islamically, the main factors that we can see need screening with regards to cryptocurrency include, firstly, the notion of Gharar. Gharar in Islamic finance indicates the impermissibility of high uncertainty vagueness so high that it cannot be quantified.

Knowing the globality, vastness and digital criteria of cryptocurrency, uncertainty need to be brought down by clarifying the exact functions and elements of bitcoin. Additionally, matters like the origin of the currency and its issuance, the means through which it is distributed, the assets in play in transactions as well as the manner it is used are things to be accurately analysed.

Viewing cryptocurrency deficiencies and all the different aspects to be included suggests that each crypto asset requires its own screening with regard to the aforementioned areas and other relevant and necessary areas.

Thus, coins are not deemed permissible or impermissible until they have undergone the standard screening. We must be careful though to not generalize and take it that cryptocurrency is all non-compliant with shariah but rather that the process of screening needs to be one that is rigorous, comprehensive and precise.

The limitations and opinions

Nothing, of course, comes without limitations and cryptocurrency is the same. Issues typically that exist with regard to the currency outside of its compliance include a variety of factors. Mainly, the regulation of cryptocurrency as a digital decentralised asset. There is always a question of what rules apply.

Another aspect looked into is the ethicality and the environmental cost of cryptocurrency as it has been claimed in 2017 that the computing power required to keep the Bitcoin network running consumes as much energy as was used by 159 of the world’s nations. Consequently, many countries today, like Bolivia, Morocco, Ecuador, Egypt and more have outright banned the use of cryptocurrency due to the lack of regulatory support among other factors.

Among Muslim scholars, there seems to be a variety of opinions on its permissibility. While many scholars have deemed it not permissible as they questioned it being a real currency at all and thus linked its permissibility to it being a legal tender or standard currency, others put cryptocurrency in a middle ground between prohibition and permissibility drawing conclusions based on it’s risky and speculative nature.

Some scholars have also pointed out that despite the transparent nature of the currency itself, there is a lack of ability to completely know the identity of traders due to the pseudo nature of individuals online which may lead to illegitimacy in transactions. Today, many functioning cryptocurrency screening platforms run based on the opinion that states the acceptance of crypto as long as it meets the set shariah criteria.

Editor’s Note: This post was originally published in December 2019 and has been edited and updated for relevancy and comprehensiveness.