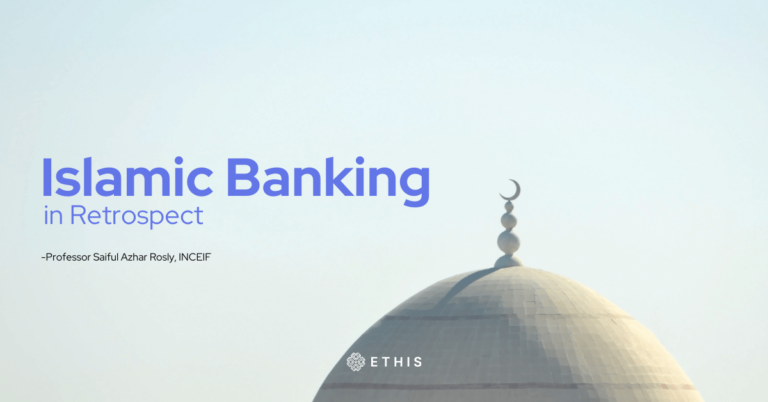 By Professor Saiful Azhar Rosly, INCEIF : Much of the modern Islamic banking business was set up in the 1970s, but discussions had been around much earlier, predominantly among Islamic economists. For this reason, it is not surprising to see the concern for economic justice and equity from profit-loss sharing (PLS) arrangements such as mudaraba and musharakah against the evils of riba (usury/interest) which is blamed for the economic injustices that people face. Riba is said to favour the rich class over the working class as the former holds greater command of income and assets. Small businesses and startups stand no chance to compete with big companies for bank loans. In a way, PLS can be the way out to introduce justice into the banking business.

Early Muslim economists such as Mahmoud Abu Saud, Nejatullah Sidiqqi, Umar Chapra, Zubir Hasan and Abbas Mirakhor followed by the younger cadres at the Islamic development bank (IDB) have contributed tremendously to the field with much stress being placed on the Islamic economic objectives, which is obvious. The drive for economic development and stability in Muslim countries has produced significant debate on Islamic fiscal and monetary policies based on the zakat system and other redistributive instruments like waqf and sadaqah.

Role of profit and loss sharing in the Islamic economy

On the monetary side, the PLS system is set to affirm economic stability and full employment in the Islamic economy. Much of the views were expressed in the Neoclassical and Keynesian tradition which leaves many gaps left unattended. For example, the utility was used as the basis of Islamic economic behaviour.  The IS-LM model is frequently used to illustrate price stability and full employment in the Islamic economy. Muslim economists were also leveraging on the Shariah such as zakat, prohibition of riba and subsequently PLS as the financial instrument to promote economic development and income equality.

This trend tends to continue today given that macroeconomic concerns are on the top of national economic agendas. This time Islamic banking has taken over Islamic economics since many Muslim governments show support for the Islamic banking business. Many Islamic banks were set up within a dual banking system regulated by the Basel standard. One fundamental precondition for operating Islamic banking is Shariah compliance which puts high demand for qualified Shariah scholars to advise Islamic banks in complying with Shariah principles.

Shariah compliance has been structured well into banking operations to include products, transactions and dealings of the business. Other compliance matters are associated with the distribution of profit and loss of investment account, derecognition of tainted income, zakat obligations and the disclosure of Shariah non-compliance events.

Related: Islamic Fintech – A Threat for Islamic Banks or an Opportunity?

While much of these compliance matters are carefully observed by Islamic banks, relatively less attention is given to the fundamental issues raised by Islamic economists. In the modern sense, these are financial inclusion, real-sector financing and development banking.

Much of these issues were researched by academia and focused predominantly on measuring the performance of Islamic banks associated with profitability, efficiency and stability. While results are mixed, growing criticisms of Islamic banks mimicking conventional practices cannot be ignored. Otherwise, Islamic banking will never be a remedy to economic injustices created by the riba system.

Are shariah scholars playing their role?

Shariah advisors today are less literate about economics and finance. Much of this has to do with the establishment of Islamic banks as deposit-taking banks. Lack of exposure to capital regulation and its impact on risk-taking has made them insensitive to the vicious nature of tawaruq. It is prone to create asset bubbles from low-interest rates, unforgiving to defaulters and guarantees depositors with capital protection and fixed profits.

With Islamic economists being sidelined from shariah advisory duties, shariah scholars ultimately took Islamic banking under their control. Their invaluable knowledge of shariah was indispensable to ascertain the Islamic legitimacy of the banking business. The taqlid culture too helped put shariah scholars in a stronger position as very few dared to question their fatwas and resolutions.

Hence everything stopped at shariah compliance, regardless of whether Islamic banks were complicit actors in the riba economy. Ultimately research findings boiled down to economic factors affecting banking performance such as bank size, default risk, overhead costs, competition and liquidity. Bank type, typically referring to Islamic or conventional bank did not seem to matter since both were similar in character.

Those who have found Islamic banks to be superior to conventional banks have a moral responsibility to be tactful in justifying their findings. Many have resorted to none other than PLS to justify their storylines. This of course comes from a lack of knowledge on actual practices of Islamic banks.